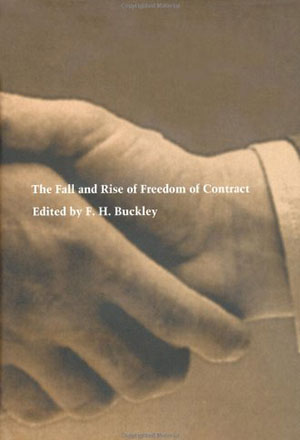 Declared dead some twenty-five years ago, the idea of freedom of contract has enjoyed a remarkable intellectual revival. In The Fall and Rise of Freedom of Contract leading scholars in the fields of contract law and law-and-economics analyze the new interest in bargaining freedom.

The 1970s was a decade of regulatory triumphalism in North America, marked by a surge in consumer, securities, and environmental regulation. Legal scholars predicted the “death of contract” and its replacement by regulation and reliance-based theories of liability. Instead, we have witnessed the reemergence of free bargaining norms. This revival can be attributed to the rise of law-and-economics, which laid bare the intellectual failure of anticontractarian theories. Scholars in this school note that consumers are not as helpless as they have been made out to be, and that intrusive legal rules meant ostensibly to help them often leave them worse off. Contract law principles have also been very robust in areas far afield from traditional contract law, and the essays in this volume consider how free bargaining rights might reasonably be extended in tort, property, land-use planning, bankruptcy, and divorce and family law.

This book will be of particular interest to legal scholars and specialists in contract law. Economics and public policy planners will also be challenged by its novel arguments.