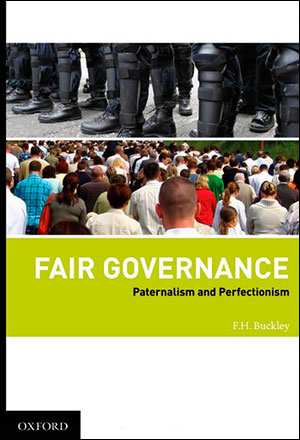 Fair Governance: The Enforcement of Morals is a study of legal interference with individual preferences and will canvass the interdisciplinary literature in economics, psychology, philosophy, and law. It discusses the particular conditions necessary for the state to legally interfere with our freedom of choice, whether it be to either satisfy our individual pursuit of happiness (perfectionism) or to prevent us from making immoral choices (paternalism). Relatively few philosophers know much of the parallel literature on this central problem of ethics; while many legal scholars are acquainted with the psychological literature on judgment biases, they are frequently unfamiliar with the philosophical literature on perfectionism. F.H. Buckley carefully links these two notions of state power with recent empirical literature on judgment biases and happiness studies and surveys the literature, arguing for a nuanced form of social perfectionism, one which seeks to promote the kind of liberal nationalism found in the United States.